Introduction to modern amphibians
Let’s talk about amphibians! When it comes to those cute, little animals, living both in water and on land, everyone has in mind the small frogs and salamanders that dwell in ponds and rivers. One can also consider the newts or the unique axolotl, an animal keeping a neotenic form. Few would include those limbless worm-like animals, the caecilians. However, if identifying amphibians may seem trivial nowadays, because of their peculiar characteristics, such as their ontogeny, the actual term “Amphibia” appears to be quite loose in systematics.
Here is the first article of a series that will present you the coolest vertebrates and all the problematic brought by this group. 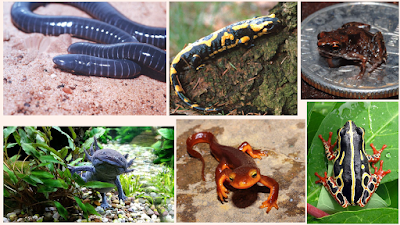 Figure 1: Some example of modern amphibians. Clockwise, a South American caecilian, a fire salamander, Paedophryne amauensis (the smallest vertebrate known), a common reed frog, a Pacific newt, and an axolotl.

I)              An obscure definition for a mysterious clade: problematic in taxonomy.
First, we need to understand what an amphibian is. Amphibia comes from the Greek ἀμφίβιος (amphíbios), which “both kinds of life” or “living on both sides”. For a long time, it was used to describe animals that could reside at once in water and on land. However, taxonomic problems quickly rose with this wide application. On the one hand, it appeared that modern “amphibians” were closely related together than with any tetrapod group, forming a clade then named Lissamphibia. And on the other hand, more and more fossil taxa were identified as “amphibians”, the term referring then to any non-amniote tetrapod.
In other words, Amphibia became, sensu lato, a paraphyletic grade, including Lissamphibia, but also temnospondyls, lepospondyls, and all the stem-tetrapod taxa (which illustrate the transition from water to land, such as Ichthyostega or Acanthostega). Since then, biologists and paleontologists are not agreeing on what should be called “Amphibia”. Nonetheless, common ground can be found. 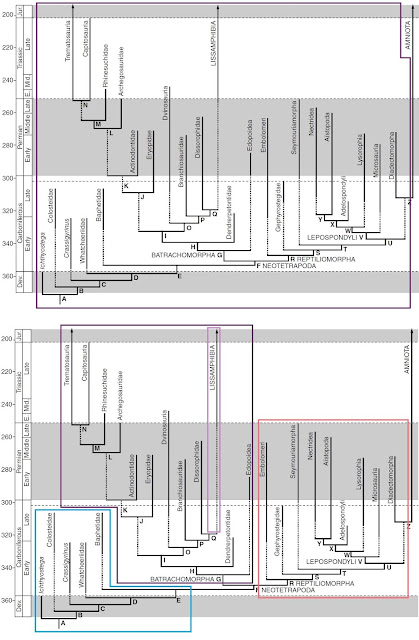 Figure 2: Evolution of Amphibia taxonomy. On top, the old-fashion way, where Amphibia (dark purple) was referring to all animals living both in water and on land, and can be used in ecological context (=amphibious). On bottom, the necessity to respect taxonomy and splits the groups of stem-tetrapods (blue) and stem-amniotes (red), and where Amphibia is synonymous of Batrachomorpha, the most inclusive clade containing Lissamphibia (light purple) and their stem-taxa. Modified from Benton, 2014.

From an ecological point of view, it is still acceptable to refer to “amphibians” for animals sharing this unique way of life. However, it would require distinguishing stem-tetrapods, stem-lissamphibians, and stem-amniotes. Also, since they are not the only vertebrates to have adopted the environment of the land-water interface through Evolution (nowadays, seals and crocodiles illustrate such adaptations), some authors would rather refer to them as “amphibious taxa” (van der Valk, 2012).
And from a systematic point of view, Amphibia would now be defined to include lissamphibians and their stem-groups, which would make it synonymous of Batrachomorpha. On the same note, Lissamphibia will then be comprised by all modern taxa and their stem relatives, namely Apoda (the caecilians), Salientita (frogs), and Urodela (salamanders and newts). Some authors argue that the extinct Albanerpetontidae would also be part of Lissamphibia.
II)            An overview of Lissamphibia.
Lissamphibians are represented today by over 8,000 species (AmphibiaWeb, 2020), with a worldwide distribution with the exception of Antarctica. Although the biggest diversity is observed in tropical regions, some species extant up to the North Pole and down to Tierra del Fuego, the meridional-most point of South America. Among the most common features shared by lissamphibians are the four digits or double occipital condyles, but those characteristics are also found in non-lissamphibian fossils.
Nonetheless, molecular analysis strongly supported both the group’s monophyly and its position as sister-group of amniotes. On top of that, lissamphibians shared a set of physiological, ecological and osteological autapomorphies:
1.     they are ectotherm animals, which means they rely mostly on environment to control the heat of their temperature;
2.     their skin is rich in glands with a thin stratum corneum (the outermost layer of epidermis);
3.     their eyes are covered by an eyelid;
4.     they have a tricameral heart, with three chambers: two atria and one ventricle;
5.     their ontogeny involves a larval stage with external gills going through metamorphosis, and therefore a biphasic life-cycle;
6.     their skeleton is poorly ossified, either because of loss, reduction or fusion of the bones, notably in the skull;
7.     their gonads have large fat bodies, used as an extra source of energy;
8.     their teeth are bicuspid, usually with attached to the inner jaw (pleurodonty), where the crown and the root are not fused but connected by fibrous poorly mineralized tissue (pedicelly), giving flexibility;
9.     they have a canalis perioticus, a channel that connects the perilymphatic sac and the perilymphatic cistern in the inner ear
10.  they have a papilla amphibiorum, which is the second sense receptor in the inner ear and works within 600 to 1000 Hz range;
11.  the radius and the ulna articulate with a single enlarged, ossified structure on the humerus (radial condyle). 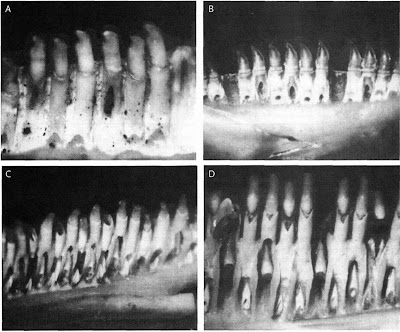 Figure 3: Pedicellate teeth, as represented by the three modern amphibian orders. A, the salamander Amphiuma means. B, the caecilian Gymnopis mexicanus. C, the frog Rana occipitalis. D, the leptodactylid frog Calyptocephalus gayi. From Carroll, 2009.
Among additional features, can be noted the intermaxillary glands, the short ribs and the palatal opening between the pterygoid and the parasphenoid, but those also occurred in other Paleozoic taxa, such as temnospondyls.
Next time, we’ll see the different groups that constitute Lissamphibia.