Last November, a paper published in the prestigious journal Science described an enigmatic fossil found in the Burmese ambers: a skull completely preserved! Not only is such a finding unique, but the authors used this material, and other previously described, to erect a new species of the mysterious amphibian group Albanerpetontidae: Yaksha perettii. This would be one of the best preserved 3D-skull of this group, and also the second species occurring in Asia. Indeed, the Asian fossil record of these tiny amphibians has been really scarce, with only some unidentified bones from Uzbekistan and a skull from Japan. Aged from early Cenomanian (about 99.6 and 93.5 million years ago), this new species would be contemporaneous of the occurrences found in central Asia. 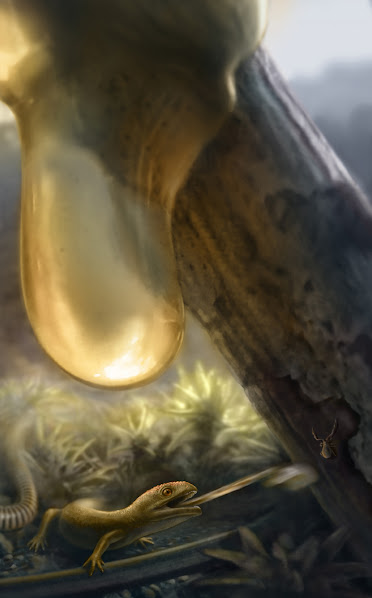 Named, after a mythical spirit in Eastern belief and Adolf Peretti (director of the Peretti MuseumFoundation and GemResearch Swisslab, who found the fossil), this new albanerpetontid provided lots of surprises and features that allowed paleontologist to understand better these animals now extinct. This new species is based on three specimens: the holotype (comprised of the skull), another specimen that preserved the post-cranial skeleton, and a paratype comprised of a juvenile with the cranial and post-cranial skeleton, which had been previously described as a stem Chamaeleonidae.

With the computed tomography, the authors were able to capture in detail the specimens and describe them, without breaking their protective amber. The holotype is the first fully articulated 3D-skull recovered from this group. It reveals the presence of epipterygoids in contact with the quadrate (making it a core element of the jaw suspension), a complete and fully articulated braincase (rarely found in this group), and, most striking, a long median hyoid entoglossal process with soft tissues attached! More soft tissues have been recovered, confirming the presence of scaly eyelids, claw sheaths and minute body scales.

The specimen exhibits large fenestrae in the roof of the cranial cavity, but this one is not homologous to the supratemporal fenestrae found in amniotes, as only the parietals participate to its structure and it opens in the adductor chamber. Thanks to this specimen, it is now known the orbital in albanerpetontids is framed by the lacrimal, the prefrontal, the frontal, the parietal and the jugal, but not by the maxilla. The holotype also provides the first complete palate, a region of the skull that was never described before. It yields large choanae separated by a narrow vomerine bar and large palatines forming independent structures. The pterygoid shape differs from the one observed in frogs and salamanders: the palatal portion meets the posterior ridge of the vomer and there is not pterygoid flange, the tapering posterior edge meeting with the medial side of the quadrate. 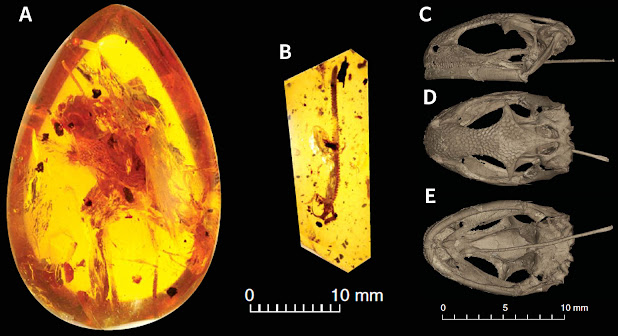 Figure 2: A and B, holotype and paratype of Yaksha perettii in their amber gangue; C to E, high-resolution computed tomography (HRCT) of the holotype with jaws articulated in lateral, dorsal, and ventral views (modified from Daza et al., 2020).

The other specimens confirmed the presence of four-digit manus, with curved ungual phalanges, and the tripartite composition of the pelvic girdle (the first fully articulated pelvis recovered). Most interesting is that albanerpetontids seem to have a pelvis supported by two sacral ribs, where lissamphibians have typically only one. The shape of the iliac blade, similar to that of chameleons would have allowed the legs to be angled ventrally for climbing. It also appears there is ontogenetic variation in the dentition, with juveniles having conical teeth with expanded roots and acute apex, and adults having tubular teeth with a more regular diameter between the root and the apex. The specimens also provided evidence of tooth replacement for the first time, and suggest it would slow with age.

However, instead of helping to resolve the phylogeny of albanerpetontid, Yaksha only brought more problematic. Indeed, phylogenetic analyses placed the new species as sister taxon of the clade comprised of the Japanese (and much older) Shirerpeton and the clade of Albanerpeton nexuosum and derived Cenozoic Albanerpeton. The main problematic of this configuration is that both Yaksha and Shirerpeton are nested within the genus Albanerpeton as currently defined, which is not allowed in systematics (one genus must only be comprised of species belonging to the same genus). However, these two genera are the only formally named representatives of Albanerpetontidae in Asia, and their diagnostic features distinguish them clearly from other Albanerpeton species. Therefore, this new species support the idea that the genus Albanerpeton require a revision and a subdivision, especially considering its temporal range over 100 Ma, and the authors support the option on restricting Albanerpeton only to the most derived species occurring in the Cenozoic. 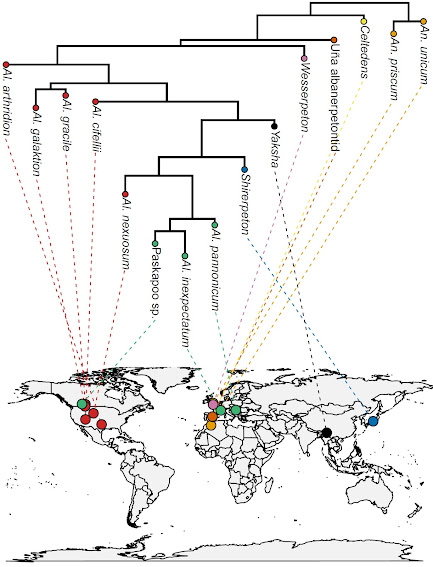 Figure 3: Geographical distribution of the type specimens (or the main record in the case of the two forms not formally referred to a specific albanerpetontid) and a proposed dichotomous phylogeny. The red dots correspond to Albanerpeton sensu lato and the green dots to Albanerpeton sensu stricto (from Daza et al., 2020).

Last but not least, the new specimens bring more frustration when the authors try to implement it in different matrices to test the origin of the modern amphibians. Indeed, there is no strict consensus on how lissamphibian would have risen from more ancient groups (and from which group), and this question remains a highly debated topic in paleontology. Albanerpetontids, as considered closely related to lissamphibians, have been seen as a solution, but because of their fragmentary and scarce fossil record, they appear to be more source of the problem. Indeed, their relationship with other lissamphibian appears to be as variable as there are possibilities: as caudate or stem-caudate; as stem-batrachians; as the sister group of Gymnophionomorpha; or as stem-lissamphibians! 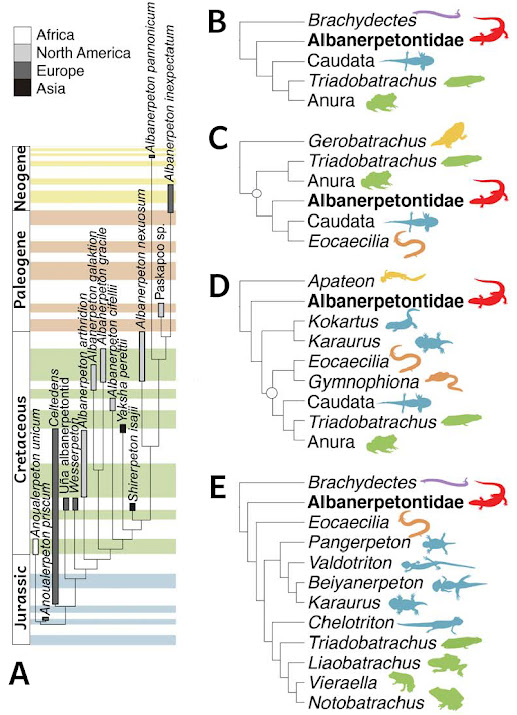 Figure 4: A, Phylogenetic relationships of albanerpetontids with geographical distribution plotted against time; and B to E, Alternative positions recovered for Albanerpetontidae in relation to lissamphibians using different data matrices (modified from Daza et al., 2020).

Nevertheless, if phylogenetic analyses were not conclusive, this new species yield enough elements to help paleontologists to understand better the biology of this enigmatic group. As seen before, the entoglossal process of Yaksha has been found embedded in soft tissues, which have been described as remnants of the tongue pad. This peculiar characteristic is now known in chameleons, where hyoid element is attached to the base of the tongue, surrounded by collagenous sheaths and a circular accelerator muscle; and in plethodontid salamanders, in which as the tongue extends, the entire hyoid apparatus is folded into a bundle of cartilaginous rods that is projected out of the mouth again by circular protractor muscles. If the presence of the entoglossal process is first reported with Yaksha, it has been previously interpreted as a cultriform process of the parasphenoid in Celtedens megacephalus.

This new interpretation would suggest that albanerpetontids had a ballistic feeding strategy analogous to the one observed in chameleons or plethodontid salamanders. It would explain the complex and characteristic neck and jaw joints, as the curved ungual, the articulation of the hips, and the position of the orbit. Therefore, long-time thought as salamander-like amphibians, albanerpetontids would look like closer to small lizards living and waiting on trees and using their tongue to capture small invertebrates.

It is still unsure how albanerpetontid would have developed this strategy. Indeed, plethodontid salamanders are lungless, but use the hyoid apparatus for buccal pumping. Free of constrains from breathing, they develop their specialized tongue feeding strategy. However, albanerpetontids are known to be covered by scales, which would seem contradictory with a cutaneous respiration, although caecilians revealed some extent of such exchange. Maybe this constraint would explain the miniature size of albanerpetontids.

This new discovery enlightens the mysteries surrounding this enigmatic group of amphibians, but also proves more research needs to be done. Hopefully, more well-preserved specimens will be found soon!

More details on the original article: