Maio 25: Robert DePalma: K-Pg and the extinction of dinosaurs 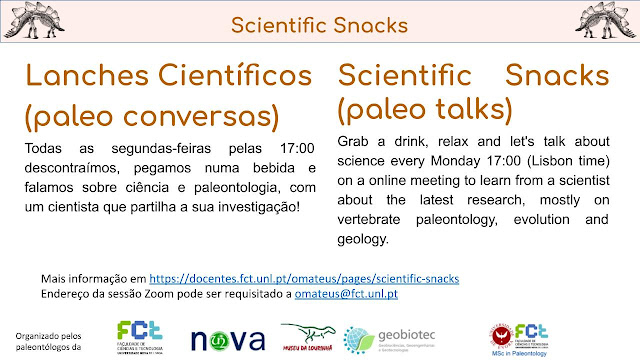 Abril 13: Takehito Ikejiri - Extinction prior to the K-Pg

Under a lucky star: A lifetime of adventure

Do you know Indiana Jones? The famous archaeologist traveling across the world exploring ancient temples with his whip, constantly running from his enemies?

Well, you may be surprised that this fictional character created by George Lucas has experiences which are pretty close to those lived by a real person.

Roy Chapman Andrews was an American explorer and naturalist. He was born on January 26, 1884, in Beloit, Wisconsin. The early years of his life were spent in the surroundings of his house, enjoying the time in the wild and learning the basics of taxidermy.

This ability allowed him to save some money to buy the ticket to travel to New York, where he started to work as a janitor at the American Museum of Natural History. Due to his ability as a taxidermist, he started to assist the curator of the exhibitions, and later he received his first quest as a museum employee: collect a giant whale skeleton. This first expedition was the first of many, which lead him to the mysterious Asian continent. First, he was enrolled in the study of whales, later he started a series of expeditions which culminated in 1922, with the first motorized expedition in the Gobi Desert, Mongolia. This was the first expedition to use cars and had a huge resonance, not only for the important scientific discoveries, but also since it opened new routes of commerce between China and Russia. These expeditions resulted in the discovery of famous extinct animals, such as the dinosaurs Protoceratops and Oviraptor; specimens of Paraceratherium, the largest terrestrial mammal, and the only known skull of Andrewsarchus monogliensis, the largest carnivorous terrestrial mammal. Despite these remarkable discoveries, his expeditions were really successful since he found the first dinosaur nest with dinosaur eggs preserved intact.

After the Asian explorations, he became director of the American Museum of Natural History and in 1942 he retired to private life. He died on March 11, 1960.

This book, Under a lucky star - A lifetime of adventure, is the autobiography of Roy Chapman Andrews, wrote in 1943, it can be found easily since it has been published and reprinted several times.

In this book are narrated the first years of life around Beloit, then the years in New York, the explorations in the continent which completely stole his soul, till the early years of the 1940's.

During these chapters, he describes the cities and the environment of East Asia during these romantic years, when the most part of Asia was still unexplored and local people were bound to their traditions in the deepest way. He dedicates time to describe the study of whales, the hunt for a man-killer tiger, and the explorations, ranging from tropical islands to the Asian jungle till the Gobi Desert, where he faced sandstorms, dinosaur excavations, and bandits.

It is a clear picture of the Asian world in the eyes of an occidental person in the early decades of the past century. Definitely a book worth to be read if you love the spirit of adventure and exploration; beware: you may fall in love with Asia as well. 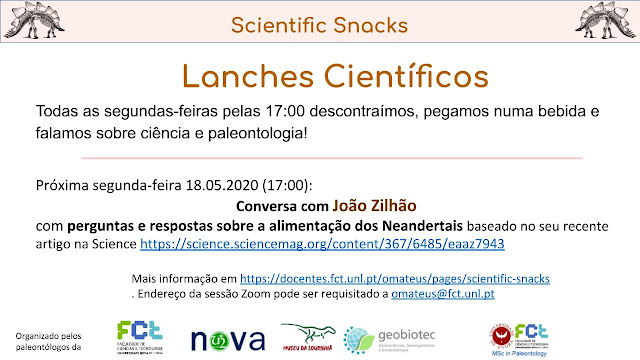 Jurassic ornithopods track back: insights from the ichnological record of the Lusitanian Basin

In the precedent post we presented evidence that suggested that ornithopod dinosaurs in Portugal during the Late Jurassic were more diverse than we previosly thought.  We also some found some intriguing evidence that some specimens were resembling Early Cretaceous species more than their coeval Jurassic relatives.

Another line of evidence supporting this interpretation comes from the rich ichnological record  of the Lusitanian Basin. Alongside with body fossils, tracks are a pretty common findings in the Upper Jurassic exposures of the Lusitanian Basin.
Tracks do not just give an idea about which kind of animals roamed Portugal 150 millions of year ago, but also give information about their behaviour and iteractions.

Castenera and colleagues (2020) examined several  footprints housed in the collections of Sociedade de Historia Natural (SHN), proceeding from the upper Kimmeridgian and lower Tithonian outcrops around the areas of  Torres Vedras and Lourinhã municipalities. They found out a rich assemblage of footprints, representing small sized ornithopod/neornithischians and larger iguanodontians. Among the others, they recovered a morphotype (Iguanodontipodidae) which was previously unknown in the Jurassic but it becomes suddenly common in the Cretaceous. Iguanodontipodidae is a morphotype relatable with large sized iguanodontians which were roaming Europe in the Early Cretaceous. Although it is not possible to link these new findings directly to the body fossil evidence collected so far, this is another piece of the puzzle which help to clarify the radiation of Iguanodontia.

The different groups of Lissamphibia – Part 1

The different groups of Lissamphibia – Part 1

As exposed in the previous article, lissamphibians, or modern amphibians, is a monophyletic clade including four groups: Albanerpetontidae, Apoda, Salientita, and Urodela. Let have a focus on the two least known: the mysterious apods and the cute albanerpetontids! 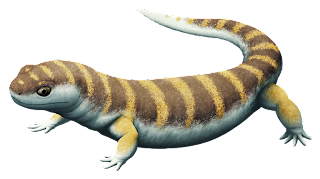 Figure 1: Representation of an albanerpetontid (credits: nix).
Probably the least known clade among lissamphibians, mostly because it is extinct (and therefore not truly “modern”), but also because its position within Lissamphibia or as a sister-group is still open to debate (Matsumoto and Evans, 2018). Albanerpetontids constitute a small group of amphibians, salamander-like forms, that occurred from the Middle Jurassic to the Late Pliocene (Gardner et al., 2003; Venczel and Gardner, 2005; Delfino and Sala, 2007).
Albanerpetontid are found either in vertebrate microfossil assemblage, in fissure fills, or in floodplain deposits. The fossil record is mostly located in Laurasia, the supercontinent grouping North America, Europe, an Asia, although one occurrence is from the Early Cretaceous of Morocco. Up to date, 5 genera and 13 species have been described, and more material has been attributed to undetermined genera or species. However, some of these descriptions may require a revision, since the phylogeny of this group retains some issues. 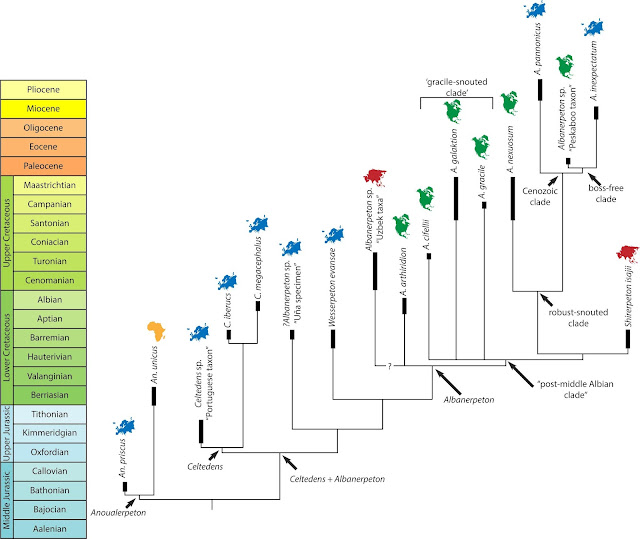 Figure 2: Cladogram of Albanerpetontidae, with their time and geographical range.
One of the major problems with albanerpetontid lies in their material mostly biased toward fragmented and isolated elements. However, despite this issue, Albanerpetontids are characterized by a small set of synapomorphies easily recognizable:
1.     the fused and dorsally ornamented frontal;
2.     the “mortise and tenon” interdentary joint, where right and jaw dentary symphysis bear an interdigitating joint;
3.     the amniote-like atlas-axis complex involving a tripartite facet;
4.     the chisel-shaped, non-pedicellate, tricuspid teeth.
Very few complete specimens are available (McGowan and Evans, 1995), which befog their identification and study for systematics, especially in the Mesozoic period. Indeed, as it can be hard to recognize, the post-cranial skeleton bears very few characteristics and it is not included in systematics analyses. Furthermore, fused frontals are not only a synapomorphy of the group, but they can also be used as diagnostic features to segregate the different species. 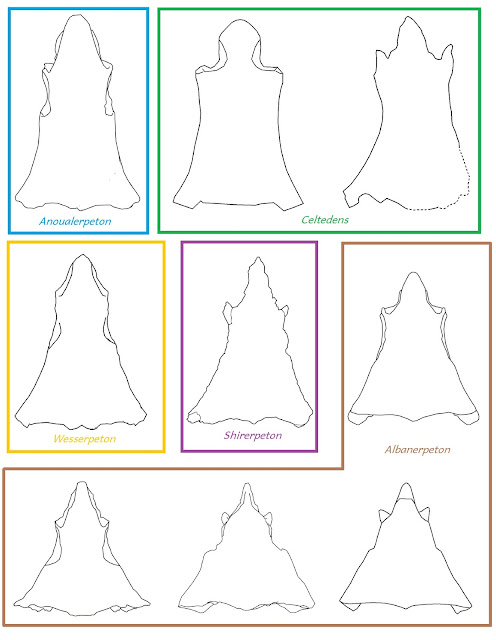 Figure 3: Frontals from different genera of albanerpetontids (from Matsumoto and Evans, 2018)
Their morphology would suggest their fossorial ecology (Estes and Hoffstetter, 1976). They supposedly lived in humid soil near freshwater ponds, where the skull would be used as a ram or a shovel, feeding on arthropods with tough chitinous shell (Wiechmann, 2000), thanks to the shearing bite allowed by their dentition (Gardner, 2001).
However, albanerpetontids constitute one major group of microvertebrates from the Late Jurassic of Portugal. Indeed, they represent one of the most abundant taxa in Guimarota mine, with thousands of remains recovered, but hundreds have also been found in the Lourinhã Formation (Wiechmann, 2003; Guillaume et al., 2019), and they are now under description.

Figure 4: Representation of an apod (credits: Manimalworld).
Another poorly known amphibian clade outside herpetology. They are a small group of vermiform animals that occurred in the Early Jurassic. One of their difficulties lies in the scarcity of their fossil record, especially for the Mesozoic period (Jenkins and Walsh, 1993; Evans and Sigogneau‐Russell, 2001; Jenkins et al., 2007). The known species fit poorly within the modern clades, which require the use of molecular data to understand their evolutionary pattern (Roelants et al., 2007; Zhang and Wake, 2009; Wilkinson et al., 2011; Schoch, 2014). 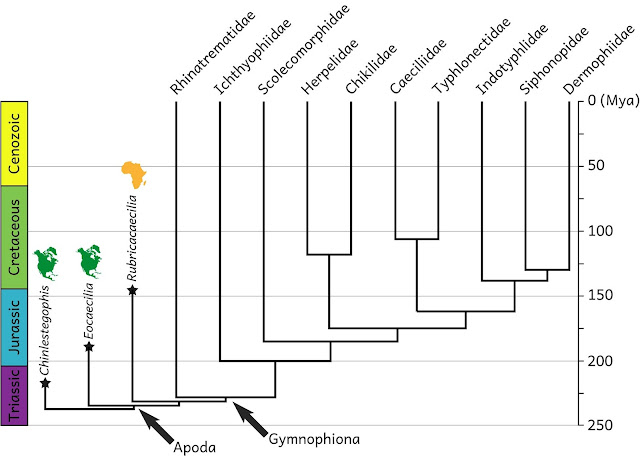 Figure 5: Cladogram of Apoda, with the occurrence of some noticeable fossil species.
Due to their highly specialize morphology, apods share a unique set of synapomorphies:
1.     the trunk greatly elongated, exhibiting an increase of presacral vertebrae, ranging from 95 to 285;
2.     as a consequence, and as other vertebrates with similar adaptation, lungs are asymmetric, the right one being the larger;
3.     the skin is segmented with primary and secondary rings, the former correlating with myosepta;
4.     male individuals display a phallodeum, an unpaired, intromittent organ formed by a projected portion of the cloaca;
5.     the absence of limbs and girdles in all extant and extinct species, with the unique exception of Eocaecilia, the most basal taxon;
6.     the short tail skeleton, which can be even lost in some species;
7.     the presence of a massive skull, weakly fenestrate or entirely closed, with solid fusion of the different bones;
8.     as a consequence, eyes are largely reduced, or can even be covered by dermal bones in some species;
9.     the presence of a tentacular organ between the eye and the nose, used a chemosensory.
The extant groups have a tropical distribution, and molecular analyses suggest their dispersal road may be linked to the breaking of Gondwana during the Cretaceous (Zhang and Wake, 2009). However, the early radiation should have occurred before the breaking of Pangea (Roelants et al., 2007; Wilkinson et al., 2011). As reflected by their skull morphology, they are fossorial and nocturnal animals. They live mostly in the topsoil layers and occupy a full range of environment: decaying plant material, humus, wet mud of riverbanks, or fully aquatic habitats. They usually feed on earthworms and arthropods (beetles and termites), but the biggest species can also prey on lizards, snakes, and even small birds!

Figure 6: Geographic distribution of extant apods.
Nowadays, no apods are living in Portugal and unfortunately, none have been found in the fossil record neither. However, if we are not focusing on them in Lourinhã, it does not mean they should be forgotten! We still have a lot to learn about them, especially since recent studies may suggest a different path in their evolution (Pardo et al., 2017), and we will go back on this when we talk on the origin of Lissamphibia.

Next time, we will see the Batrachia, the clade that groups both Salientia and Urodela, the best-known amphibians. Until then, stay home and be safe!